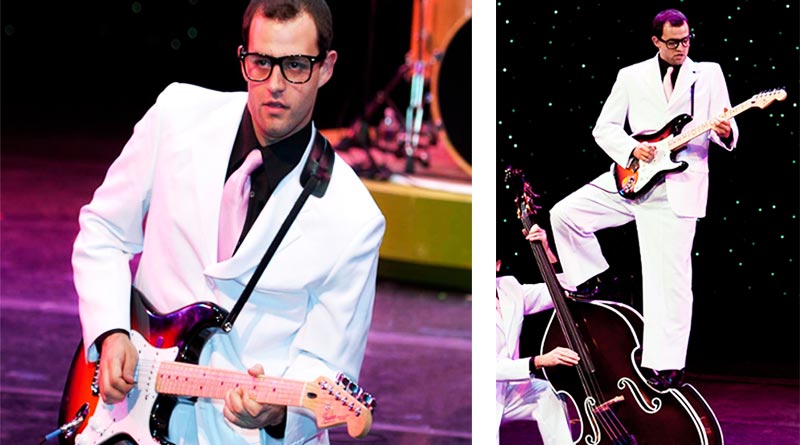 Blasting Don McLean’s song “American Pie” will undoubtedly bring you to the verse “the day the music died” – a line alluding to the plane crash that killed three rising American rock stars: Buddy Holly, Ritchie Valens and J.P. “The Big Bopper” Richardson. And though you may have heard some of their songs, you can find out more about why Holly (and the others) were immortalized in McLean’s lyric by going to see “Buddy – The Buddy Holly Story” – which tells the true story of his rise to fame – presented at Suffolk Theater, on Nov. 12 and 13.

The musical features more than 20 of Buddy Holly’s greatest hits, with songs like “That’ll Be the Day,” “Peggy Sue,” and “Everyday,” as well as Valens’ “La Bamba” and The Big Bopper’s “Chantilly Lace.” It pays tribute to this legendary singer with his music, but also the story of his life and passing at age 22 in the plane crash.

“Buddy – The Buddy Holly Story” is a national touring production, directed by Steve Steiner and starring Todd Meredith, who has portrayed the young, glasses-wearing rock icon in numerous productions.

I can guarantee that this musical will have you tapping your feet and leaving the theater humming to the songs of this mid-50s singer-songwriter, even if you aren’t of that era. Who doesn’t love some good, old-fashioned rock ‘n’ roll, anyway?

And if you go, have a rocking good time, readers!